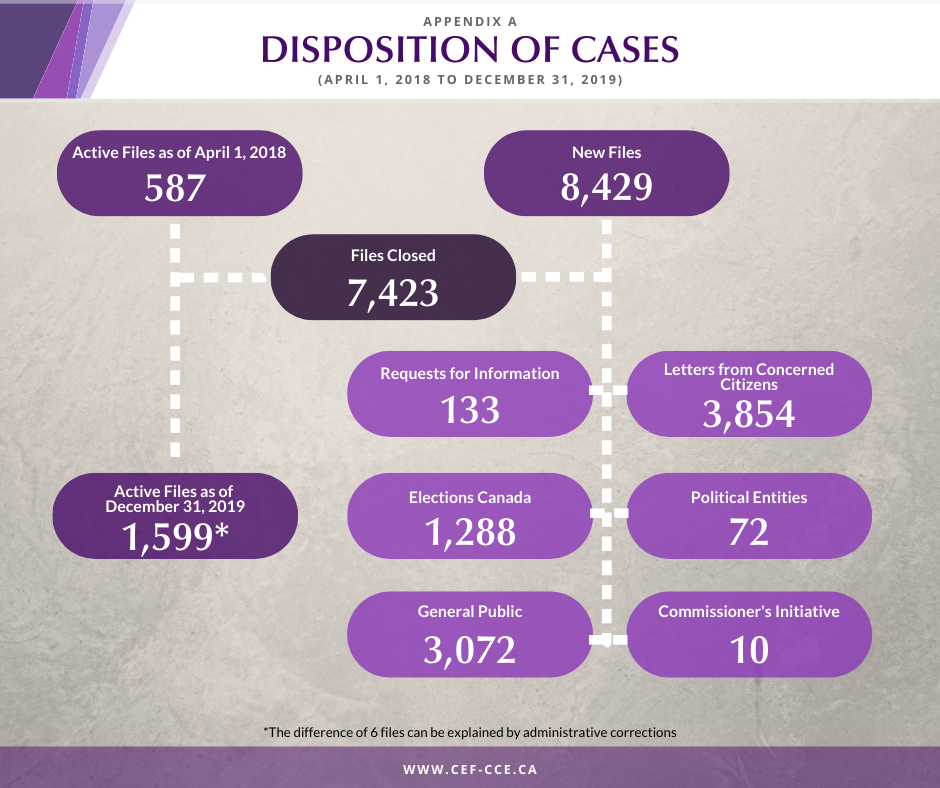 Most common referrals from Elections Canada:

Most common potential offences having given rise to complaints from the public:

Most common complaints received during the election period, by alleged violation

Note that all of the information represented in this section stems from categories assigned during the intake process. These categories may be modified depending on information arising out of a review or investigation.

Making or publishing a false statement 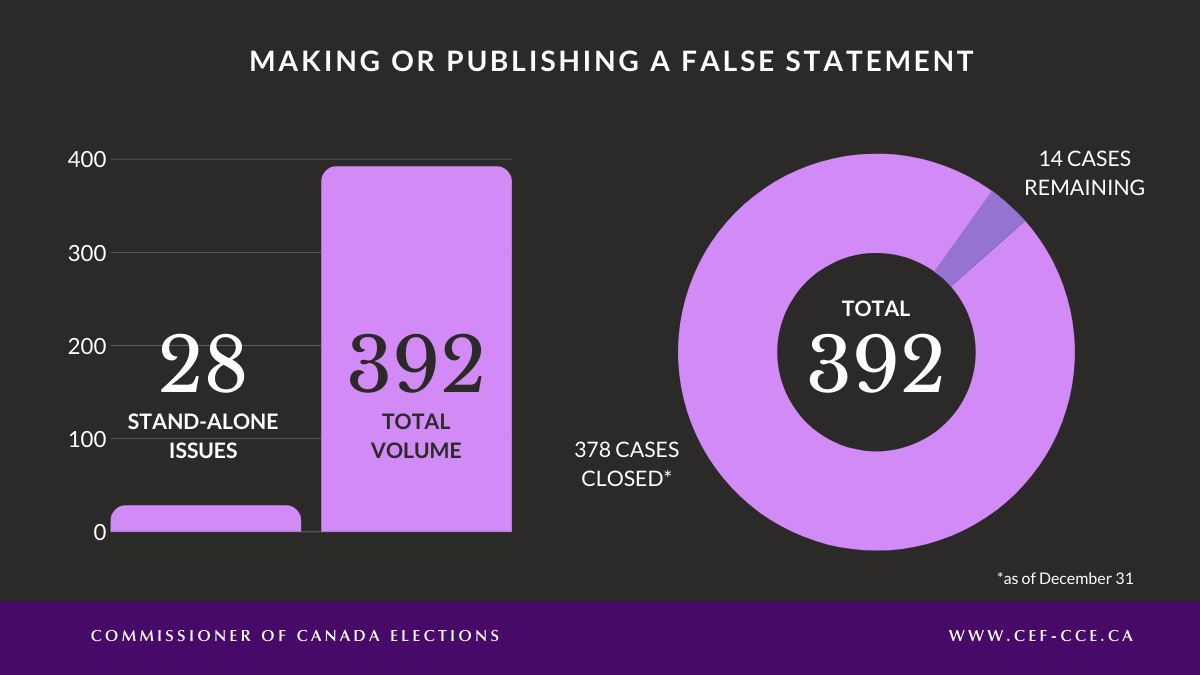 Of the 392 complaints related to false statements, the majority of the complaints were the result of allegations that a party leader was under investigation by the RCMP. This was seen by many complainants as a contravention of subsection 91(1) of the Act. Following a review of these complaints, the Commissioner concluded that the intention of Parliament was not for this provision to apply to statements that are based on reasonable interpretations of credible information from a source reasonably expected to be knowledgeable in the matter.

Foreign attempt to influence electors to vote or refrain from voting 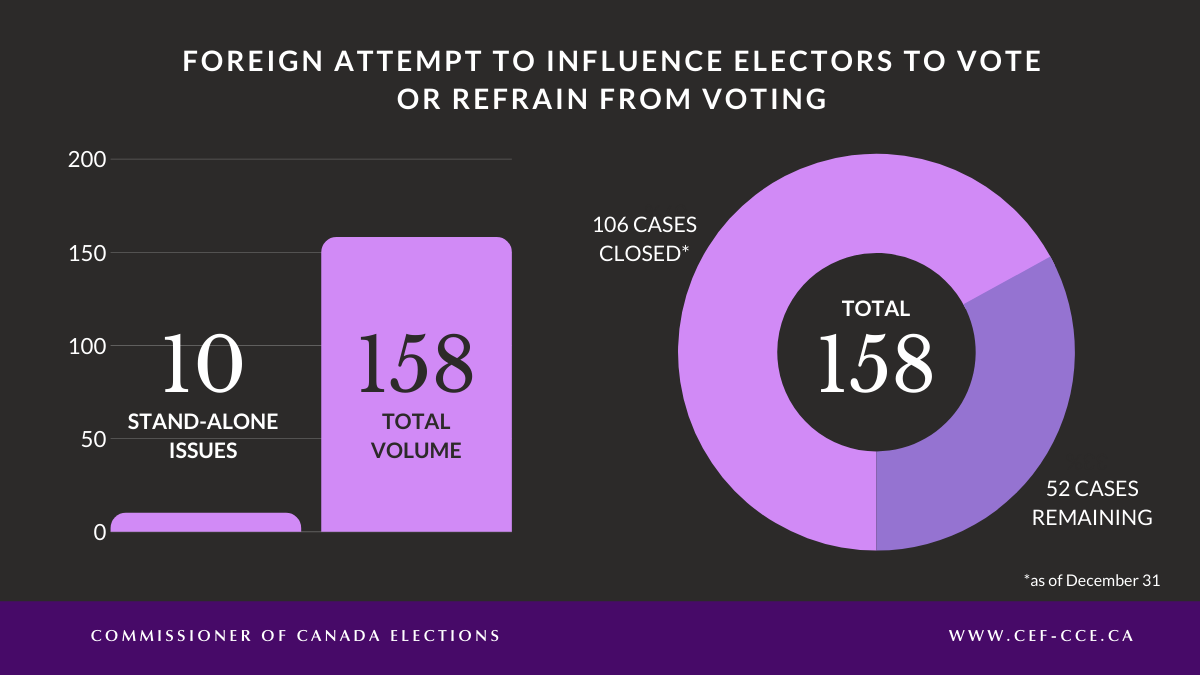 Out of the 158 complaints regarding foreign interference, 100 were related to an article in a foreign publication featuring a party leader. Following a review of these complaints, it was concluded that there was no contravention of the Act, as it constituted editorial content.

Failure to indicate on election advertising that its transmission was authorized 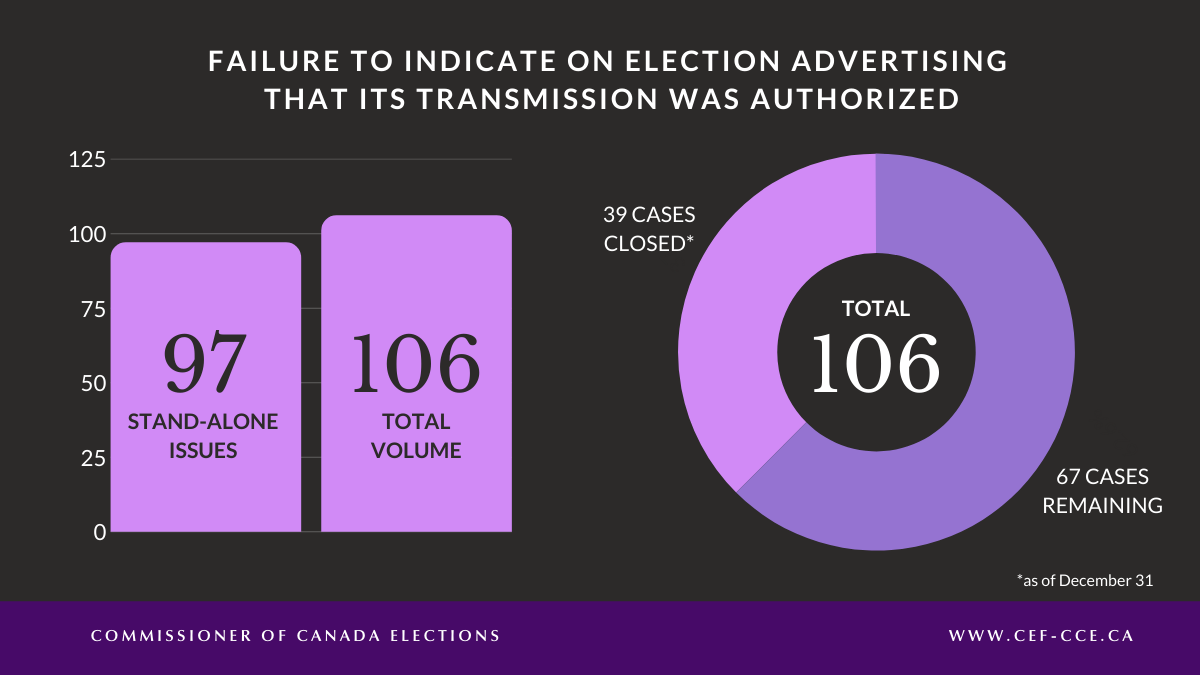 The Act requires that advertising contain an authorization or 'tag line' indicating the message is being transmitted with the consent of either the official agent for a particular candidate or the registered agent of the party. The Act does not stipulate how large the font must be or — in the case of a radio broadcast — how quickly the authorization may be spoken.

There were 106 complaints alleging election advertising that failed to contain an authorization statement. Many of these complaints were resolved informally during the campaign by communicating with the candidate or party; others were deemed to be unfounded as the authorization was present albeit difficult to read.

Preventing or impairing the transmission of election advertising 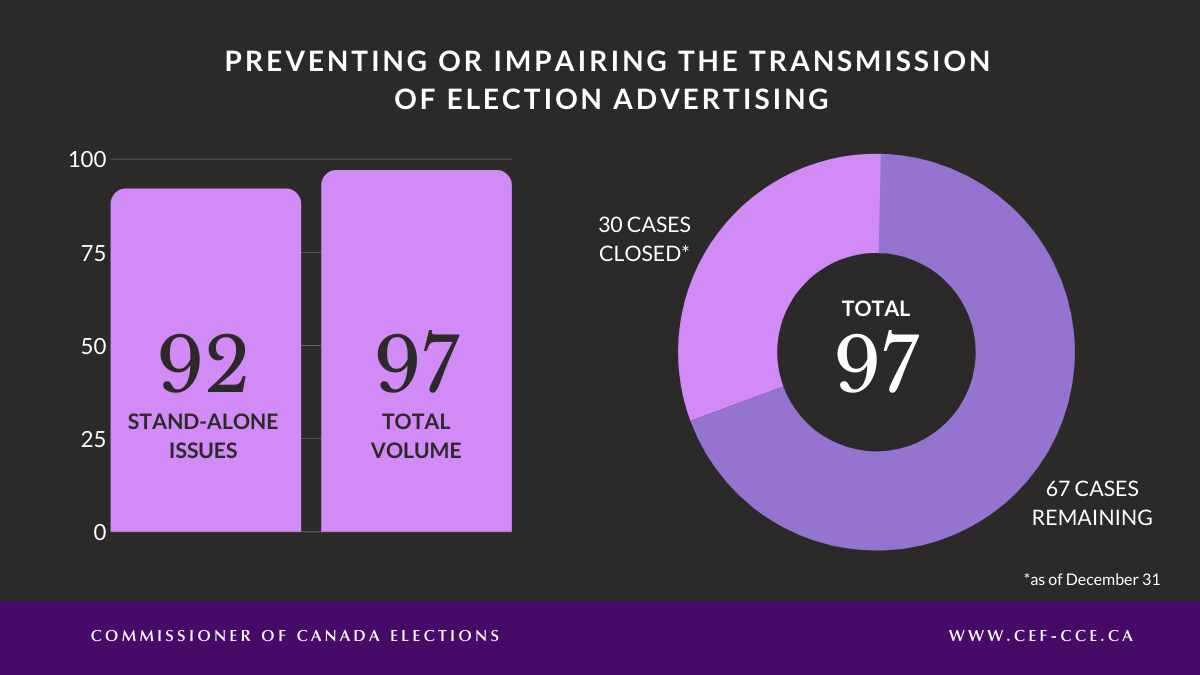 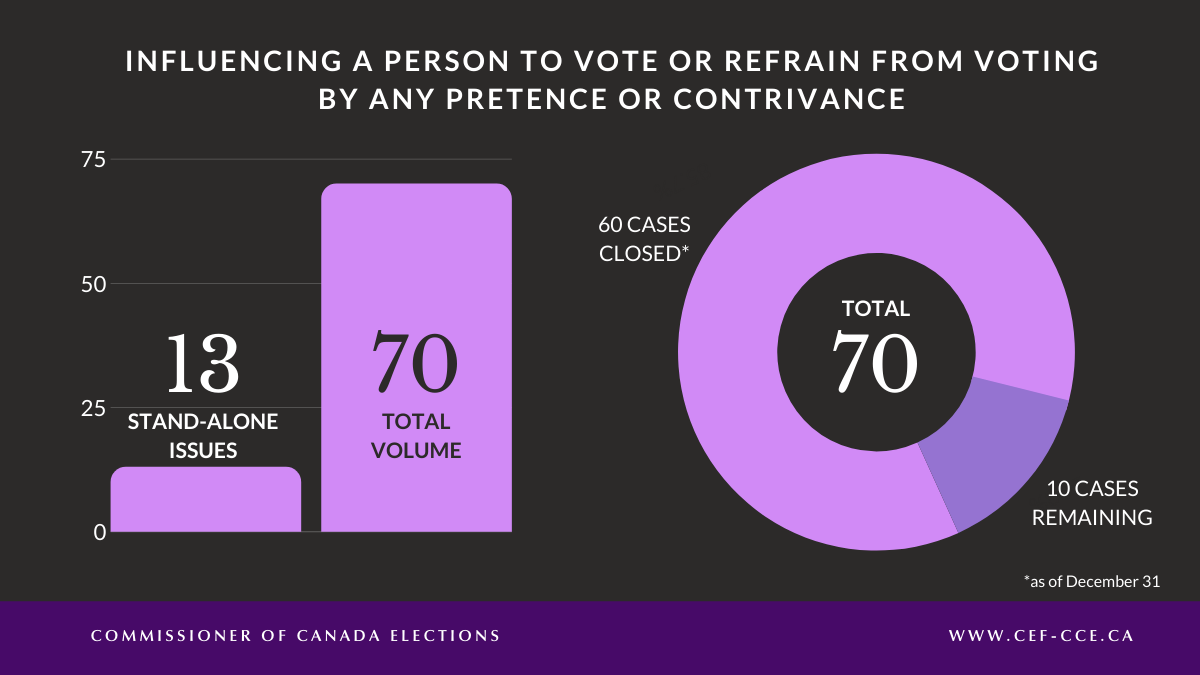 The CCE received 70 complaints regarding the possible influencing of a person to vote or refrain from voting by using a pretence or contrivance. Following a review of these complaints, an informal resolution was reached and all cases are now closed. 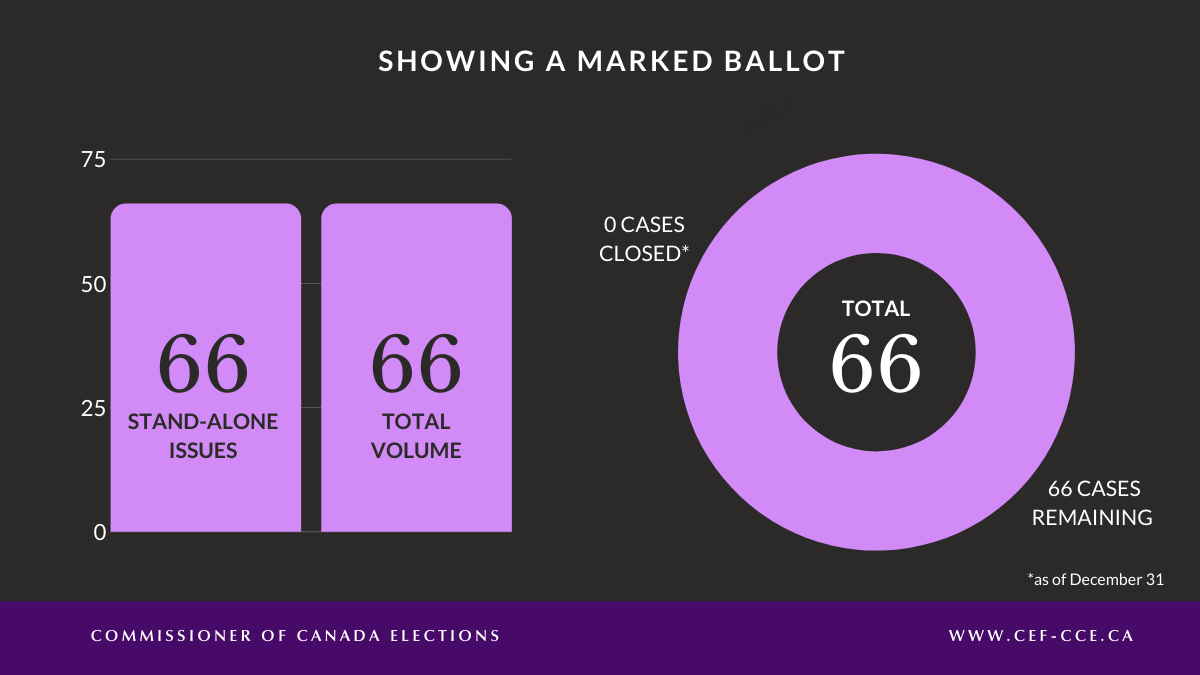 During the election period, the CCE received 66 complaints related to failure to maintain secrecy. Most of those were related to circumstances concerning electors posting pictures of their marked ballots on social media.

Voting more than once 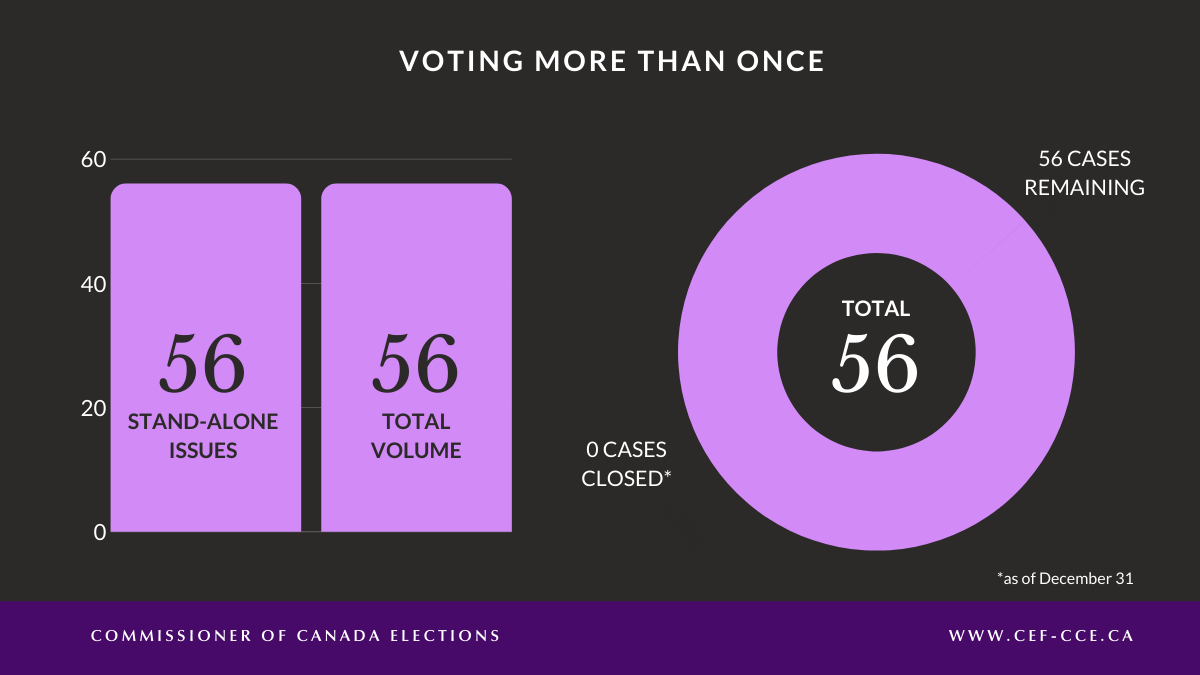 The CCE received 56 complaints regarding individuals voting more than once. Due to the administrative procedures surrounding the retrieval of electoral records, these files remain open. These delays are normal in the immediate post-election environment and it is expected that the CCE will receive the records required to complete its analysis of existing files in 2020-2021. 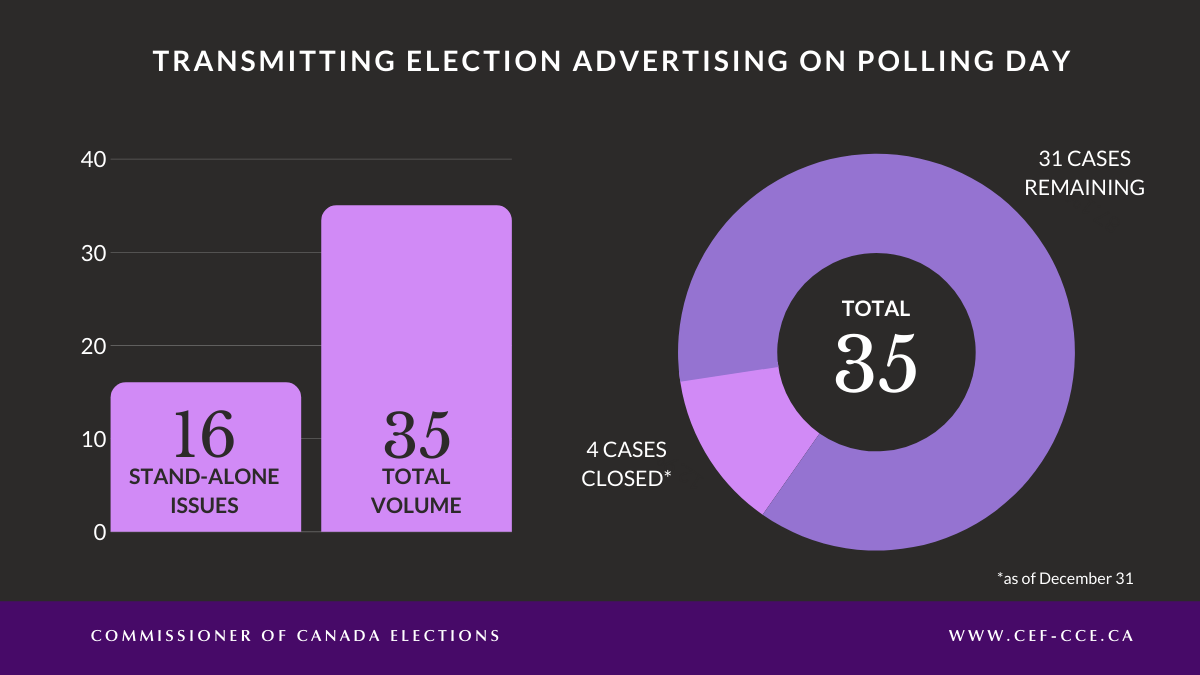 Failure of third party to register

Third party advertisers who spend $500 or more during an election period are required to register with Elections Canada and their expenses are subject to spending limits. These limits are dependent on the length of the election period and third parties must be produce reports detailing their expenses within four months of polling day.

Among the 34 complaints received by the CCE during both the pre-electoral and electoral periods, a number were unfounded, while others were quickly resolved through interventions by investigators.