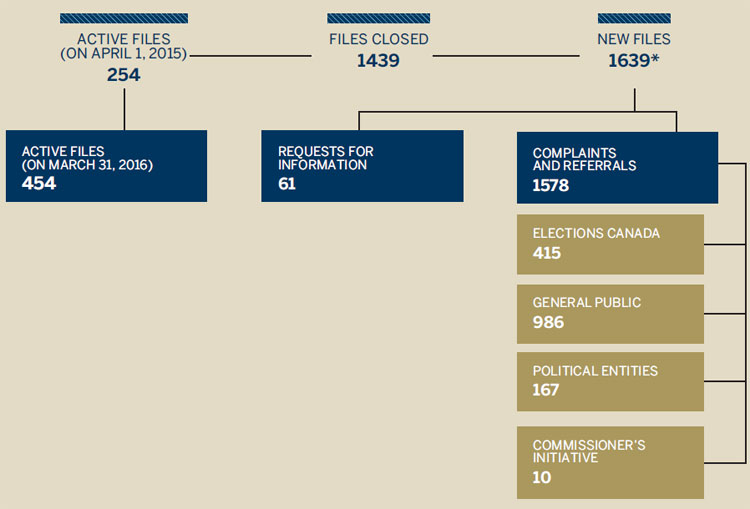 The Office of the Commissioner of Canada Elections continues to receive ccomplaints and referrals long after the end of an election period. This section provides a preliminary overview of election-related complaints received by the Office at the end of the 2015-2016 fiscal year.

This chart displays complaints related to the 42nd general election by most common themes. 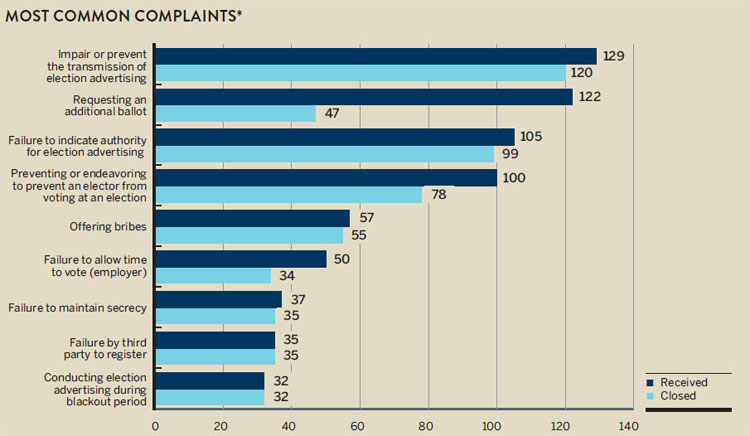 *Note: This chart represents categories assigned during the initial intake process. These categories may be changed or modified depending on information arising out of an investigation. A more detailed explanation of each of these categories follows.

Impair or prevent the transmission of an election advertising message

Of the 122 complaints regarding voting more than once, 37 were related to instances of electors having allegedly voted twice by showing up at the polls with their faces covered. As noted earlier in this report, as of March 31, 2016, none of the cases of double voting have been substantiated. Delays in obtaining additional supporting documentation account for the number of files that remained open at the end of the fiscal year. These delays are normal in the immediate post-election environment and it is expected that the CCE will receive the records required to complete its analysis of existing files in 2016-2017.

The Act requires that advertising contain an authorization or 'tag line' indicating the message is being transmitted with the consent of either the official agent for a particular candidate or the registered agent of the party. The Act does not stipulate how large the font must be or – in the case of a radio broadcast – how quickly the authorization may be spoken.

There were 105 complaints alleging election advertising that failed to contain an authorization statement. Many of these complaints were resolved informally during the campaign by communicating with the candidate or party, others were deemed to be unfounded as the authorization was present albeit difficult to read.

Willfully providing information that attempts to mislead or prevent electors from voting is not permitted.

The CCE received 100 complaints alleging that an elector had been misled. Of those, 62 claimed that various campaigns had provided inaccurate information about times and location for voting.

Following a review of these cases, it was determined that in most instances, wrong information was communicated to voters with no intent to mislead.

Offering a bribe in an attempt to influence electors is an offence under the Act. The Office received 57 complaints relating to bribery during the election period. Of those, 26 originated from members of the public who were concerned that promises or commitments made by politicians at the provincial level – which were made contingent on the outcome of the election – constituted illegal bribes. As noted earlier in this report, following a review of these complaints, the CCE concluded that the sections of the Act pertaining to bribery were not intended to capture promises or commitments made by politicians on public policy issues.

Failure to allow time to vote

In total there were 50 complaints related to employers who failed to provide the required time off for voting. Some of these cases have been resolved through the use of compliance tools directed at employers who did not provide all their employees with three consecutive hours to vote on polling day.

It is incumbent upon everyone to maintain the secrecy of the vote. The CCE received 37 complaints related to failure to maintain secrecy, and more than 20 of those were related to circumstances concerning electors posting their marked ballots on social media. This issue is discussed in greater detail in the Issues of Particular Interest section earlier in this report.

Failure by a third party to register

Third party advertisers who spend $500 or more during an election period are required to register with Elections Canada and their expenses are subject to spending limits. These limits are dependent on the length of the electoral period and must be reported within four months of polling day.

Among the 35 complaints received by the CCE, a number were simply unfounded, while others were quickly resolved through interventions by investigators.